The ceiling of the Hosios Loukas (Saint Loukas) monastery, Greece.

Listed as a UNESCO World Heritage Site, Hosios Loukas is an architectural gem, dating to the 10th century.

Santorini is an awfully popular place, but even it can be quiet during the off-season. 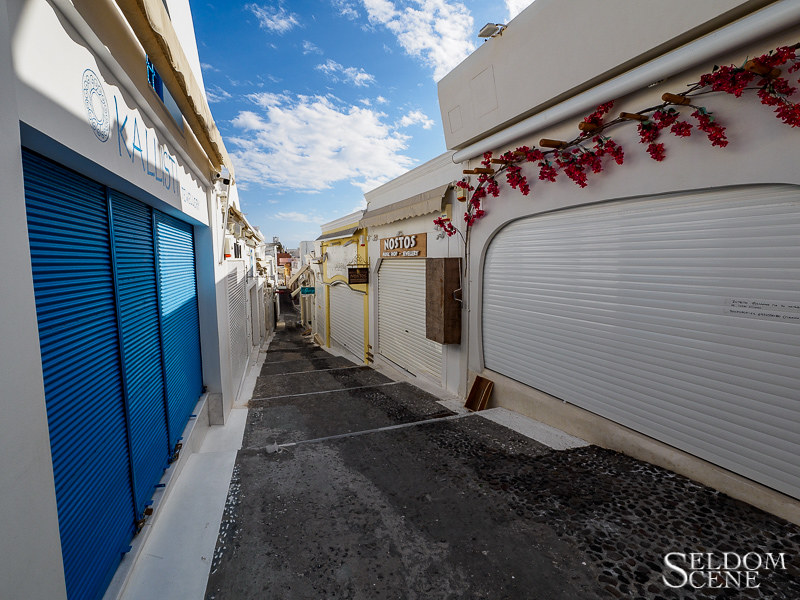 Personally, I really preferred it quiet and nearly empty (late February). No trinket shops were open, the open restaurants were ones the locals liked, and we had no crowds to deal with.

A view from Santorini, across the Thera caldera, toward the open Aegean sea.

There’s nothing but water past the little islands in the foreground until you get to Crete (~100 mi / 160 km).

A road-side sign, seen along a highway just outside Cienfuegos, Cuba:

The caption translates to “Only socialism makes the impossible possible.”  In case you don’t recognize the portrait, it’s of Hugo Chávez, the late president of Venezuela — a major benefactor of Cuba early in the 21st century.

We recently did a bit of family travel — on our way from Denver to Phoenix, we were fortunate enough to have relatively clear skies and a late afternoon flight.  Perfect for some aerial twilight photography of various spots in Colorado and the four corners region of the U.S.

First up for you, Colorado Springs (top of frame) seen over the snow covered Rampart Reservoir, not far west of town.

Colorado Springs is one of those places I normally see while driving through (in this case, on I-25) — from that perspective, the mountains form a wall to the west of the city.  But from above, the fact that the mountains are essentially a (tall) rumpled plateau is much more evident.

END_OF_DOCUMENT_TOKEN_TO_BE_REPLACED

By far one of the biggest adjustments we had to contend with when visiting Cuba was food.  Not the food we ate — not at all.  Tourists get treated to food of a quality and in a quantity comparable to what you’d find in visiting many places across the globe.

But the locals don’t get off so easily.

This is a bodega, the Cuban version of a ration center.  We visited in mid-month, when clients were few and the stock (as you can see from the shelves) thin.  From what we were told, though, bodegas are very busy places on the first of the month — when Cuban citizens can come in with their ration books and collect (at relatively low price) their month’s stock of staple foods.
END_OF_DOCUMENT_TOKEN_TO_BE_REPLACED

Of the many challenges of life in today’s Cuba, housing must rank among the greatest.  There’s not enough of it, much of the available housing stock is in terrible shape, and the Cuban legal code makes it hard to legally transfer ownership — so moving households is a big challenge.

In this shot from above (courtesy of a hotel upper-floor window), you can see how some units were turned into small yards after their roofs collapsed. END_OF_DOCUMENT_TOKEN_TO_BE_REPLACED

So given that only about 2% of Cubans own a car, and that there is no dedicated city-to-city transit system (a la Greyhound busses or Amtrak in the U.S.), how do Cubans get from place to place?

In rural areas, people can make do with more-traditional approaches — you’ll see a lot of semi-modern carriages drawn by horses out here.  I’m guessing this works pretty well for trips into town from farms in the hinterlands. END_OF_DOCUMENT_TOKEN_TO_BE_REPLACED

When people find out you’ve been to Cuba, they always seem to want to talk about the cars (at least in the U.S.).

So, just to get our footing, let’s start by talking about license plates. It didn’t used to be this simple, but relatively-modern Cuban license plates make it easy to tell whether a vehicle belongs to the government, or to a private citizen. Government vehicles have license plates with a blue strip on their left end:

Since most cars and trucks in Cuba are owned by the government, you’ll see a lot of license plates like the one above / left. I’m not sure what the “B” stands for, but it’s nearly the only letter you’ll see on Cuban government plates. One prominent exception is the “T” plate (above / right) — these are for government vehicles reserved for tourists, namely rental cars.

License plates for privately-owned vehicles lack the blue strip, and always start with a “P” for good measure:

A minor detail, perhaps, but you’ll see where this comes into play in subsequent posts.

In work and coming soon: